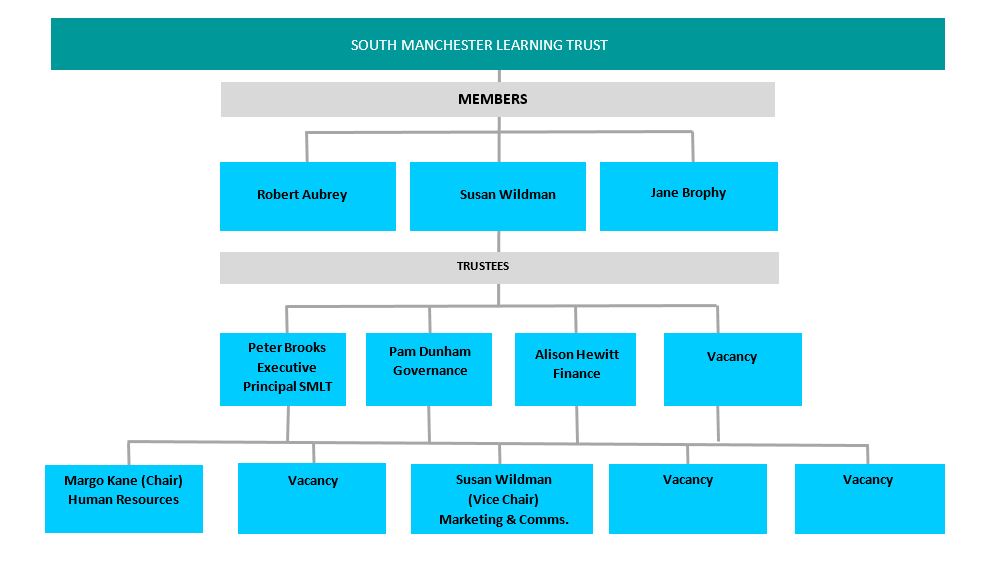 Susan is Interim Chief Executive for Oldham Coliseum Theatre and has a background in journalism, PR and customer services.  She was formerly Director of Communications with a UK Wide Charity, City Council and transport authority.

Peter is an experienced Headteacher with over twelve years in a secondary Headship role. Prior to that, Peter’s subject specialism and passion was for Physical Education and he held Heads of Department, Pastoral Leadership and Deputy Headteacher roles before moving into Headship.

In 2011 he was appointed a National Leader in Education (NLE), with Altrincham College named as a National Support School (NSS). Following that appointment, the school has developed a strong tradition of working in partnership and collaborating with other schools across the GM region. Being appointed as Executive Principal of the South Manchester Learning Trust is a natural and formal extension of his outlook and educational ethos. Peter was also the Chair of Trafford LA Funding Forum.

Pam has a BA (Hons) in Business and Finance and an MBA; both from Manchester Metropolitan University.

After a successful career in financial services she joined Stockport Council’s Governance team in 2009, becoming Co-ordinator of Governor Services in 2014. Pam manages the team of nine Governor Support Officers and provides advice and support to Governing Boards across all school settings in Stockport.

Originally from the private sector, Alison qualified as a Chartered Management Accountant and later joined KPMG Consulting to deliver Transformation and Business Process Improvement Programmes across the UK.  In 2002, she moved into the Public Sector focusing on large scale Regional Commissioning in the Northwest.  Following the dissolution of the RDAs Alison came to work in healthcare, initially in provider finance, but soon moving to work for two newly formed CCGs in Lancashire as Head of Health Economics, Performance and Programme Management.

Margo Kane is a Fellow of the CIPD, working as the Director of HR/OD for Wythenshawe, Trafford, Withington and Altrincham hospitals which are part of Manchester Foundation Trust, the largest Trust in England. Ms Kane is an experienced director who has worked across the NHS, Local Government and Higher Education sectors for nearly 30 years. As a HR/OD professional, Margo is experienced at aligning the people agenda to organisational priorities and facilitating large scale culture change. Margo is also an executive coach and is passionate about helping people realise their potential. As a Community Governor for Altrincham College and Vice Chair of South Manchester Learning Trust, Margo is proud to support our young people in gaining an outstanding educational experience.

Jane enjoys dual careers as an NHS Allied Health Professional, and in Local Government, as an elected Councillor and Parliamentary Campaigner. Jane is an elected Liberal Democrat Councillor for Timperley Ward, Altrincham